Heel spur is a hook of bone that forms on the heel bone. The condition itself is not the most painful; it is the inflammation and irritation that cause the heel pain. Often times, plantar fasciitis is a cause of heel spurs. When the ligaments are pulled away, calcium deposits form on the hooked bone. An orthotic will help relieve the pain associated with heel spurs.

Early signs of heel pain are usually due to plantar fasciitis, the inflammation of the plantar fascia. It is probably the most common cause of heel pain seen by the podiatrist. It is seen in all groups of people; runners, athletes, weekend warriors, people who have jobs requiring a fair amount of standing, walking, or lifting, and those who have recently gained weight. The pain most often manifests itself after periods of non-weight bearing when the plantar fascia is given a chance to rest, so your first steps cause a sudden strain to the tissue. Pain is most common with the first steps in the morning and after periods of rest. Fortunately, upwards of 80 percent of those treated early do remarkably well with conservative therapy. 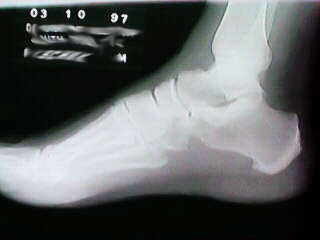 Although it may take years to become a problem, once it appears, it may cause considerable suffering. Because of proximity to the tendons, the spur is a source of continuous painful aching. The sensation has been described as "a toothache in the foot." When you place your weight on the heel, the pain can be sufficient to immobilize you.

Diagnosis of a heel spur can be done with an x-ray, which will be able to reveal the bony spur. Normally, it occurs where the plantar fascia connects to the heel bone. When the plantar fascia ligament is pulled excessively it begins to pull away from the heel bone. When this excessive pulling occurs, it causes the body to respond by depositing calcium in the injured area, resulting in the formation of the bone spur. The Plantar fascia ligament is a fibrous band of connective tissue running between the heel bone and the ball of the foot. This structure maintains the arch of the foot and distributes weight along the foot as we walk. However, due to the stress that this ligament must endure, it can easily become damaged which commonly occurs along with heel spurs.

Some heel spurs do require surgery, however surgery is a last resort. In most cases the patients underlying foot problem needs to be addressed, such as Over Pronation and Over Supination and Heel Pain Treatment Options need to be implemented if Plantar Fasciitis and Achilles Tendonitis are still an ongoing concern. Your best treatment is always prevention.

Surgery, which is a more radical treatment, can be a permanent correction to remove the spur itself. If your doctor believes that surgery is indicated, he will recommend an operation - but only after establishing that less drastic methods of treatment are not successful.
« Why Shoe Lifts Are The Solution To Leg … What Is The Most Suitable Remedy For Po… »
Profile

Caring for your feet.

Login to quote this blog

You cannot quote because this article is private.